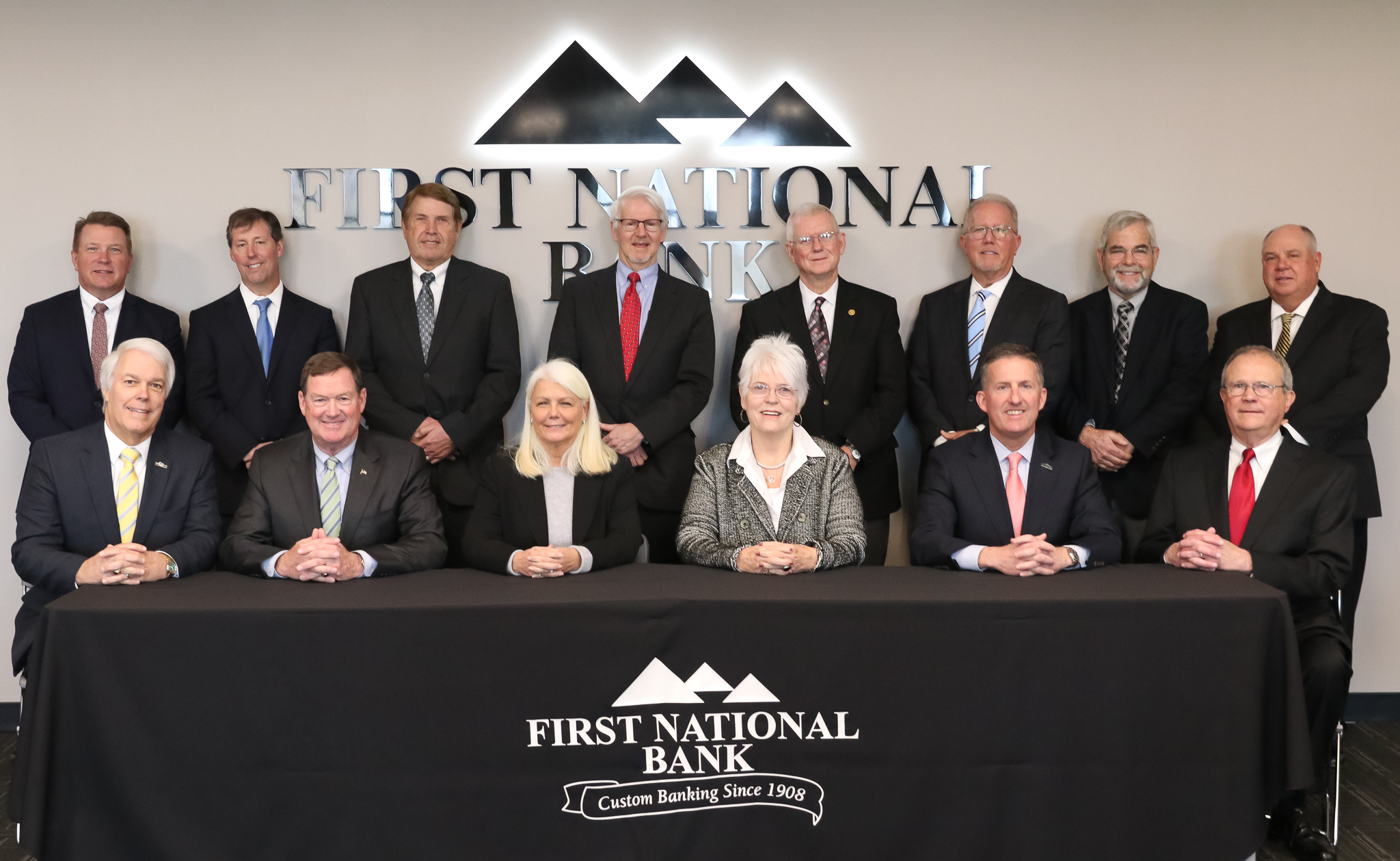 Chairman of the Board

Mr. Burton is a Business Development Manager at Slurry Pavers, a company which specializes in the maintenance and preservation of pavement. He has been employed by Boxley and its predecessor company, Templeton Paving, LLC, since 1984 and previously served as General Manager for Amlite Corporation. Mr. Burton currently serves on the Board of the Old Dominion Highway Contractors Association, and has previously served on the Board of Trustees of Westminster Canterbury in Lynchburg, Virginia. He earned a Bachelor of Science in Civil Engineering from the Virginia Military Institute. Mr. Burton brings to our Board experience in executive management with insights into corporate finance and risk management, extensive knowledge of the communities served by the Company and leadership and consensus-building skills to guide our Board.

Vice-Chairman of the Board

Mr. Merricks serves as the Chief Integration Officer of First National Bank. Prior to coming to First National Bank, he owned and operated J. W. Squire Company, Inc., a building specialties company, for twenty years. Prior to that, he served for approximately twenty-five years in various roles with First Virginia Bank, including operations, accounting and as Executive Vice President with First Virginia Bank-Piedmont, concentrating in commercial lending in the Danville region. Mr. Merricks is also a former member of the Virginia General Assembly, having served in the House of Delegates for six years, retiring in 2014. Mr. Merricks is active in several community organizations. His involvement in the community, prior banking experience, as well as his experience owning a small business and serving in the General Assembly of Virginia will provide valuable insight regarding market conditions in the combined footprint of the Bank.

Mr. Blackstock, a Pittsylvania County native, retired as Administrator of the Blue Ridge Regional Jail Authority in 2012, where he was employed for 15 years. He has over 30 years of experience with the military, law enforcement, and corrections, which includes the United States Navy, Pittsylvania County Sheriff's Department, and Virginia Department of Corrections. Mr. Blackstock serves on the Pittsylvania County Board of Supervisors as the Staunton River District Representative and as its Finance Committee Chairman, the Pittsylvania County and Danville Regional Industrial Facility Authority Board, the Staunton River Regional Industrial Facility Authority Board, and as a Commissioner on the Pittsylvania County Service Authority. He also serves on the Board of the Western Region Jail Association. He received his Associate's Degree from Danville Community College and currently serves on its Criminal Justice Advisory Board. Through his professional background and public service, Mr. Blackstock has acquired skills in budget development, personnel and operational policies, issue resolution, and preparation of legal defense matters, all of which are of value to our Board.

Ms. Burnette is a Vice President and Accounting and Human Resources Manager for Wiley/Wilson, where she has been employed since 2007. Prior to Wiley/Wilson she worked as the Human Resources Director for Consolidated Shoe Company, Inc. Other work experience includes Accounting Manager for Consolidated Shoe and Assistant Controller for Courtland Manufacturing Company. Ms. Burnette has her Professional in Human Resources (PHR) and Society for Human Resource Management (SHRM-CP) certifications. Additionally, she is an active member of the National Employee Stock Ownership Plan Association (ESOP), where she served on the Executive Committee of the State and Regional Chapter Council and is currently President of the Mid-Atlantic Chapter. Ms. Burnette graduated from Rustburg High School and Attended Central Virginia Community College. She provides valuable input to the Board regarding the oversight of employee compensation and benefits programs, as well as advocacy of the Bank within the markets it serves.

Mr. Dalton is employed by English Construction Company, Inc., a third-generation family-owned business based out of Lynchburg, Virginia, providing a wide array of construction services throughout the Mid-Atlantic and Southeast regions of the United States. He currently serves as a Project Manager, Estimator, and Home Office Manager for English, and is a member of English's founding family. Mr. Dalton serves on the board of Virginia Technical Institute. He holds a Bachelor of Arts in Economics from Randolph Macon College. Mr. Dalton's experience with the construction industry and knowledge of the Central Virginia market provides our Board with valuable insight regarding this important sector of the economy.

Mr. Finch serves as President and General Manager of Finch & Finch, Inc. Funeral & Cremation Service located in Altavista and Gladys, Virginia. The company is a family-owned and managed business, established in 1905, with Mr. Finch representing the fourth-generation of the Finch family. He attended Lynchburg College, graduated with a B. S. Degree in 1980 from Elon University, received an Associate Degree from Gupton-Jones College of Funeral Service in Atlanta, Georgia in 1992, and was licensed as a funeral service licensee in that same year. He is a Past President of the Virginia Funeral Directors Association. He was named VFDA Outstanding Member of the Year in 2008 and Virginia’s Funeral Director of the Year in 2003 and 2009. Mr. Finch is dedicated to community activities and is President of the Citizens for Altavista Baseball. He is a former member and a past President of the Lions Club of Altavista and a past board member of The Greater Lynchburg Community Trust, Altavista Area YMCA, Altavista Chamber of Commerce and Altavista Vocational Advisory Council. Mr. Finch brings to our Board extensive management acumen and valuable knowledge of the Altavista market.

Mr. Hall is President and Chief Executive Officer of the Company and the Bank. He joined the Bank in 2003 after nearly 11 years with Central Fidelity Bank and its successor, Wachovia Bank. Mr. Hall serves as Chairman of the Board of the Virginia Bankers Association's VBA Management Services, Inc. Additionally, he serves on the Board of the Altavista Economic Development Authority, the Powell Foundation, the Virginia Bankers Association, and Bankers Insurance, LLC. Mr. Hall earned a Bachelor of Arts in Accounting from Lynchburg College (now the University of Lynchburg). He is a graduate of the Virginia Bankers School of Bank Management at the University of Virginia, and the Graduate School of Banking at Louisiana State University, where is a prior member of the Board of Trustees. Mr. Hall has a diverse background in the banking industry, and a strong knowledge of the banking business. He provides our Board keen insight into the markets served by our Company and carries with him the respect of the other members of the Board as the leader of the Company.

Mr. Hurt currently serves as the Dean of the Helms School of Government at Liberty University. He is the founding Director of the University’s Center for Law and Government. Prior to his employment with Liberty University, Mr. Hurt served in the U.S. House of Representatives, representing Virginia’s Fifth District in Washington for three (3) terms from 2011 to 2017. While in Congress he served on the House Financial Services Committee.   Preceding his involvement in Congress, Mr. Hurt served as Chief Assistant Commonwealth’s Attorney for Pittsylvania County before building a successful private law practice in Southside Virginia. Mr. Hurt’s governing experience also includes three (3) years as a member of the Virginia State Senate and six (6) years in the Virginia House of Delegates. He began his public service career as a member of the Chatham Town Council.

Dr. Johnson has served as Superintendent of Campbell County, Virginia Schools since 2009. He received his Doctorate of Education in 2004 from the University of Virginia where he also received his Bachelor and Master of Education degrees. He received the William H. Seawell Memorial Award in 2003 and is currently a member of the American Association of School Administrators and the Virginia Association of School Superintendents. Dr. Johnson presently serves as a member of the Central Virginia Workforce Development Board and the UVA K12 Advisory Council. He is the past Chairman of Virginia’s Region V Superintendents and presently serves as Region V’s legislative representative. Dr. Johnson has an extensive background in education and administration and provides the Board with leadership and consensus-building skills on a variety of matters, including corporate governance and succession planning.

Ms. Merryman is Executive Vice President of Sonny Merryman, Inc., a privately held transportation equipment distributor, with primary responsibility for trailer and container sales and rentals. After attending Averett College, she was employed by the company in 1977. Ms. Merryman serves on the Board of Trustees for the University of Lynchburg (formerly Lynchburg College) and also helps and supports the Central Virginia Court Appointed Special Advocates program. She previously served on the Board of Directors of the Lynchburg Regional Chamber of Commerce and Amazement Square Children's Museum in Lynchburg, Virginia, and is a former member of Virginia Tech's "Women in Leadership". Ms. Merryman's business management experience, extensive leadership in non-profit organizations, and integral involvement in many of the communities we serve uniquely position her to be a strong advocate of the Company and to provide our Board with an important perspective on corporate strategy.

Dr. Payne is currently President of Danville Dental Associates, PC. Dr. Payne has been in practice in the Danville area for 44 years. Dr. Payne brings a wealth of experience in dealing with human resource and business decision-making which will prove beneficial to the Pinnacle board of directors.

Mr. Shelton retired from the Company and the Bank in July 2013. He served as Vice President of the Company and Senior Vice President and Chief Credit Officer of the Bank, where he had been employed since 1973 in a variety of roles, primarily on the lending side of the Company. Mr. Shelton served as a member of the Board of Directors of the Altavista Area Chamber of Commerce. He has also served on the Hurt Town Council. He has been a member of the Exchange Club of Altavista and a member of the Altavista Downtown Revitalization Committee. Mr. Shelton earned a Bachelor of Science degree in Mathematics from Virginia Tech and is a graduate of the Virginia Bankers School of Bank Management at the University of Virginia. Mr. Shelton brings to our Board an extraordinary understanding of our Company’s business, history, organization and various constituencies, as well as extensive community banking expertise and management experience.

Mr. Watson is Controller/Treasurer of Flippin, Bruce & Porter, Inc., a Lynchburg investment advisory firm, where he has been employed since 1997. His previous employment experience was as Chief Operating Officer for The Greenwood Partnership, Chief Financial Officer for The Lester Group and Audit Manager with Coopers & Lybrand. Mr. Watson is a member of the American Institute of Certified Public Accountants and holds a Bachelor of Science degree in Accounting from Virginia Tech. Mr. Watson provides our Board with invaluable expertise in financial accounting matters, auditing practices and risk management programs and policies.

Mr. Watts is Vice President of Scott Insurance, one of the largest independent insurance agencies in the Southeast, where he focuses on Commercial Property and Casualty Insurance. He has been employed with Scott since 1999. Mr. Watts received his Bachelor of Arts from the University of Virginia in 1988 and his law degree from Washington & Lee University in 1991. He practiced law at Edmunds & Williams in Lynchburg from 1991 to 1999, where he became a partner. Mr. Watts currently serves as co-chair of the Jefferson Scholars of Lynchburg Regional Selection Committee and the boards of Lynchburg Beacon of Hope, Lynchburg Area Development Corporation, and YMCA of Central Virginia. Mr. Watts provides the Board with valuable input based on his legal and business expertise, as well as strong advocacy as the Bank seeks to enhance its presence in the Lynchburg market.